Olympic Torch Relay – Run with It

The tour was dubbed a "Rolling Street Party," where high-energy activators on branded flatbed trailers/stages would sample product and pump up the crowd with music and dancing just before the torch runner's arrival. (Watch the video below.)

This coast-to-coast spectacle was the largest Coca-Cola expenditure of year. It was headed by Mark "Dill" Driscoll, founder of Momentum, which was the experiential agency for McCann-Erickson.

I traveled with the Olympic Torch Relay as the Live TV Director. Along the route, I shot additional footage that was edited into sizzle videos to increase interest and support from our retail partners and the Coca-Cola bottler network. Take a look. 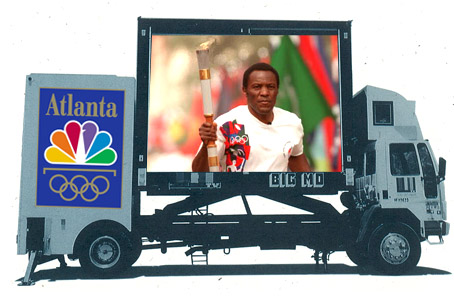 I created and produced the Coca-Cola Olympic Torch Relay show, which was performed twice daily at the noon and evening torch lighting ceremonies. I wrote the Emcee script, edited sizzle videos and directed the live coverage for NBC stations. Overflow local audiences watched our video coverage on a mobile jumbotron.